To curate and organize a full day of outdoor team building activities for 120 staff managers from the clients chain of stores across the country including travel, catering and evening entertainment

After everyone arrived and had breakfast, the beautifully sunny day started with a 20 minute warm up in the gardens of our venue to get the adrenaline pumping. We split the teams up into groups of ten and challenged them against each other in a series of games and tests and including a 100ft inflatable assault course, disco dodge-ball, foot darts, human football table, Gladiator Jousting, pony hop racing, 100ft activity assault course and volley ball. Teams were randomly made up so guest who had not met each other before could get to know each other; teams then competed against each other with only one victor at the end! There were team and individual prizes for the activities, after winners were announced and the prizes given out, guests had a chance to unwind with some street food, music and evening entertainment before whisked home just after sunset. 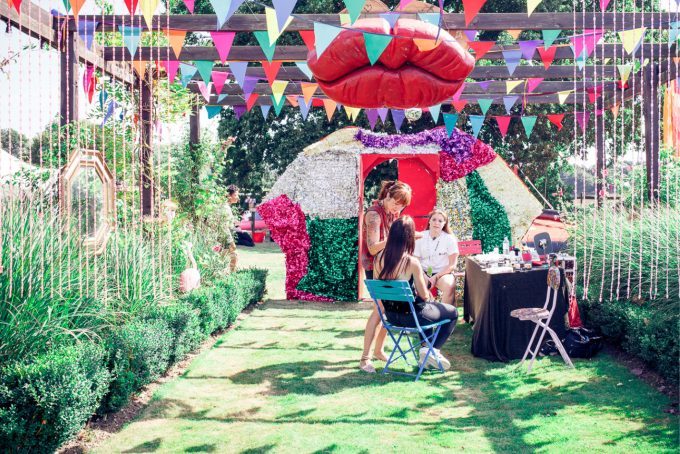 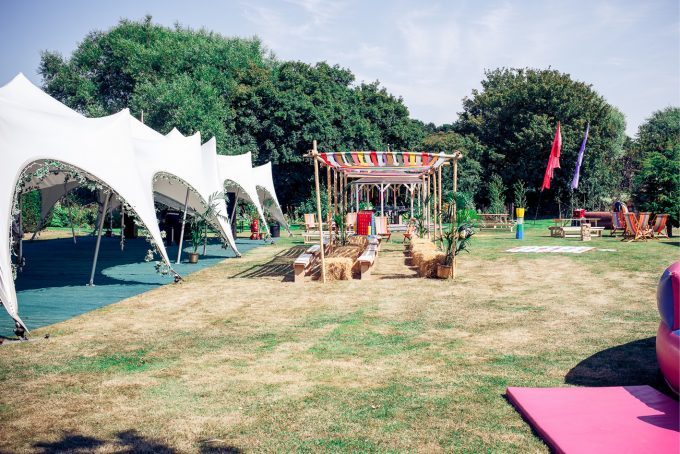 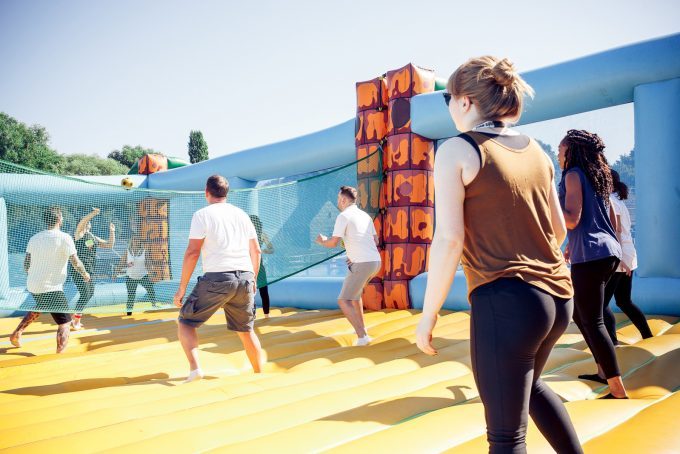 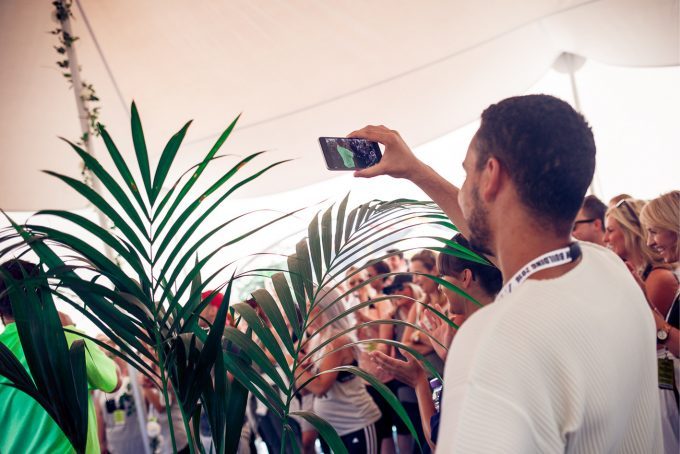 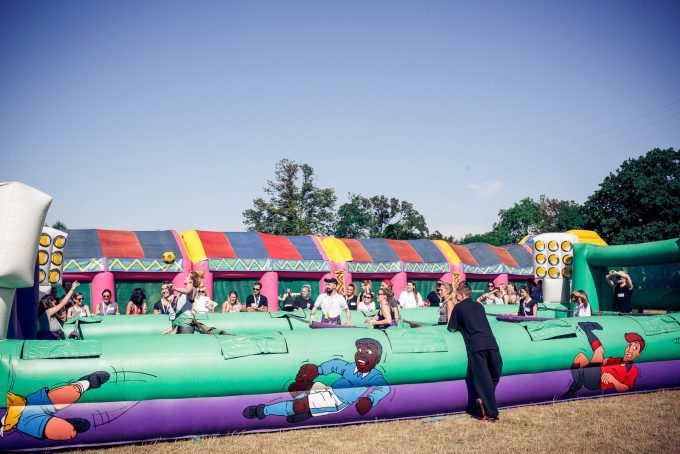 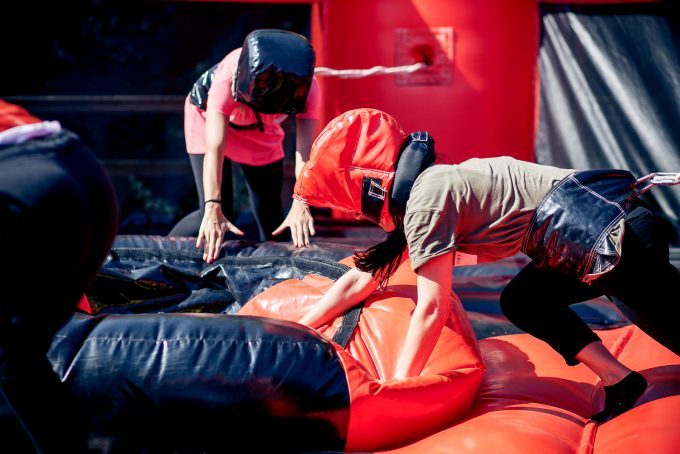 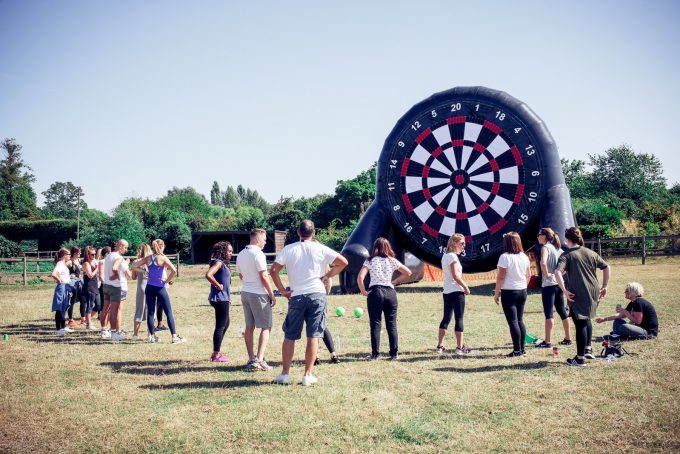 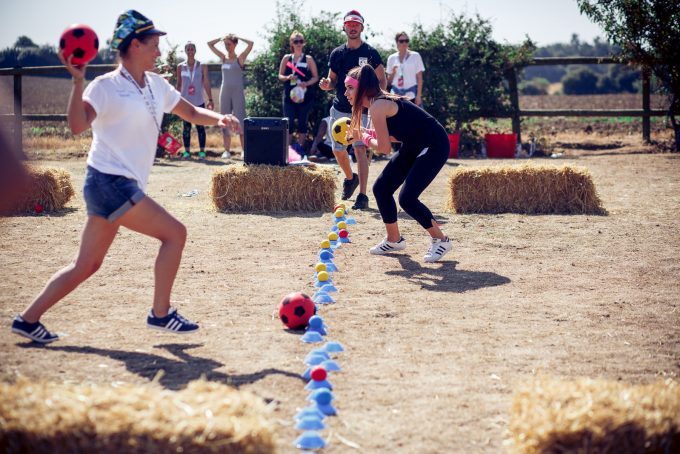 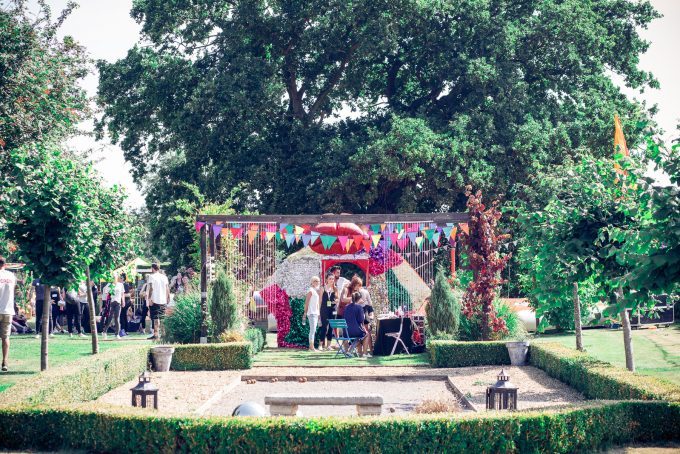 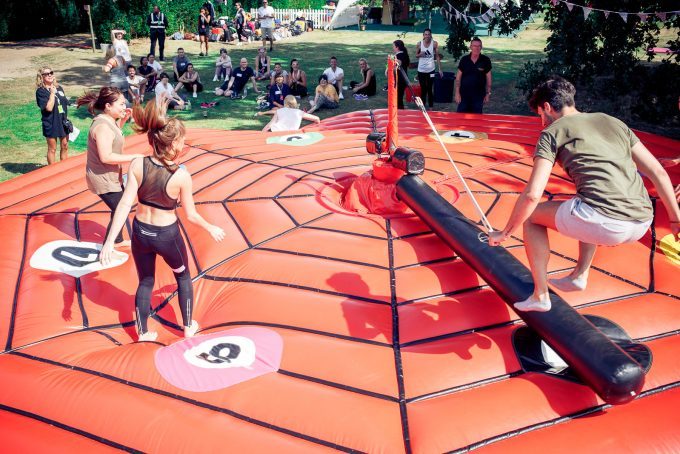 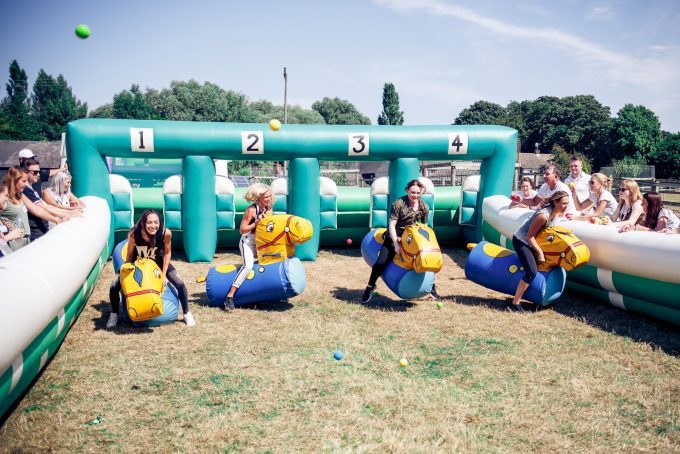 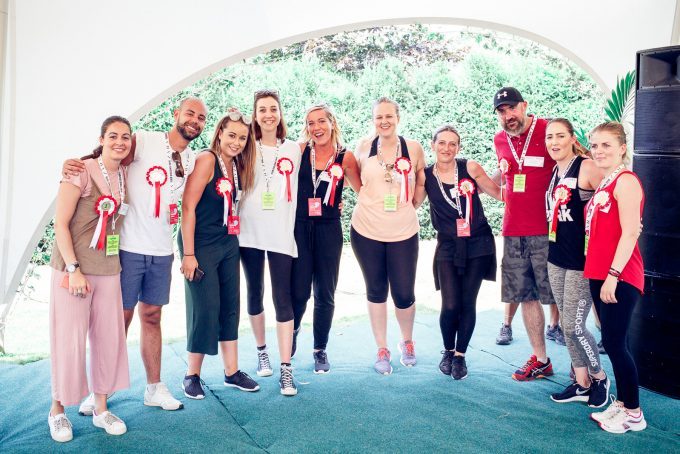 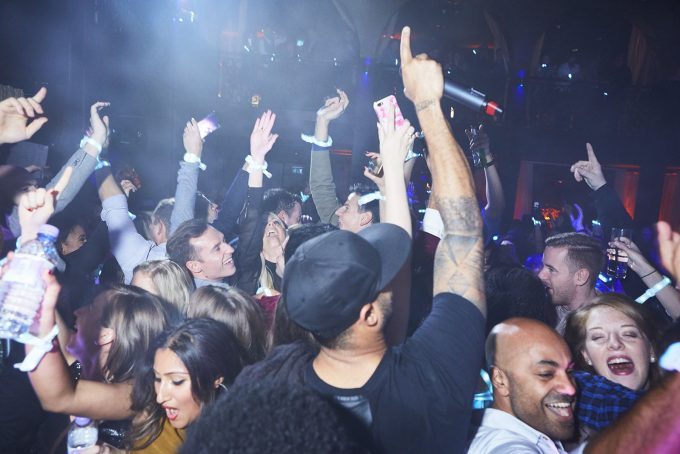 We’re the party people you want on hand for every special occasion. Parties are meant to be experienced, not just attended, and that’s why we always take a bespoke approach to the planning. 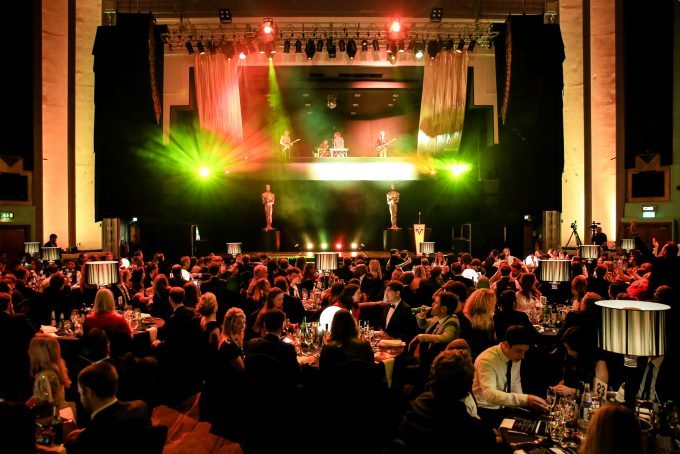 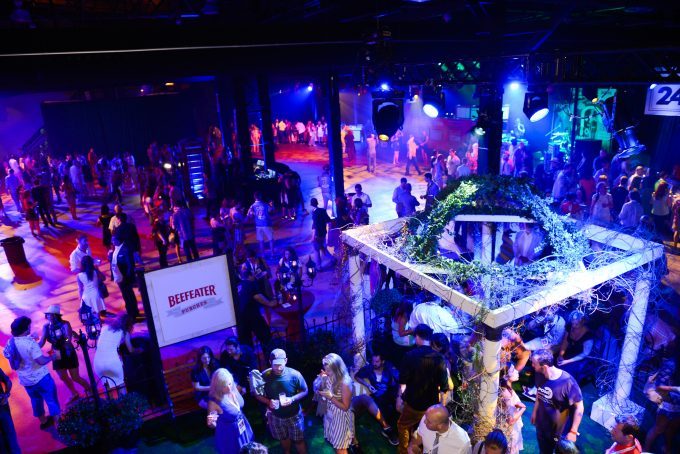 Let us put you firmly on the map with a Dynamite promotional event. Designed to create a real buzz around your business or product, our promotional events are guaranteed to be interactive, engaging and, most importantly, memorable.

“WOW, that has to be THE BEST party I have ever been to or had, everyone has been talking about how good it was, the flow of the whole event was effortless and your crew and staff absolutely lovely, cocktails amazing, sound system AMAZING, off the hook incredible!! Thanks again!” Private 50th, House Party

“Guys thanks again for organising such a great party everyone thoroughly enjoyed themselves and the DJ was brilliant exactly what we wanted. The venue and set up was awesome. Long day ahead on the sofa!!” PRIVATE 50TH BIRTHDAY – PHOTOSTUDIO

“Many thanks for all your hard work, everyone enjoyed the event.” Inditex H&S Conference

“Thanks so much for last night, we had a wonderful time” Global Private Equity Firm Christmas Party

“Thanks for a great night it was amazing!! Not sure how we will top that next year!” TIMELINE TV CHRISTMAS PARTY

“Thanks for all your help with the event, it looked great! Thanks so much” STRADIVARIOUS & TINDER STORE EVENT

“Thank you for another wonderful party… people we’re saying it was the best one yet, no pressure for next year!” LAS VEGAS THEMED CHRISTMAS PARTY

Thank you so much for a fantastic party – everyone had an amazing time. Loved the venue! Saatchi and Saatchi

Amazing party, thank you soooo much for making my 50th so special, all your team were fantastic, everyone has been talking about how good it was which is testament to all your hard work, thanks again Private Client

You guys have such a brilliant team, everything was so slick! I could not have wished for a better party and wouldn’t have changed a thing xx Saatchi & Saatchi

Best Christmas party I have ever been too, what an amazing night, Wow! Head of BT Sport

Puma has had the pleasure of working with both Dynamite and Good Times this year. Not only did they deliver one of the best parties we put on all summer, they are true professionals and a pleasure to deal with. A truly passionate two-sum that deliver beyond the call of duty. Puma

A big thank you for last night’s event, it was so much fun and everyone absolutely loved it! Our CEO’s said it was the best MF.COM Christmas party so far and also commented on how fantastic the Dynamite team and staff were. It has been so lovely working with you all and I hope we shall do so again very soon. matchesfashion.com

I just want to say that it was perfect! THANK YOU SO MUCH for your effort and help. I had an amazing time. Next year it has to be until 5:00 am! People were really happy with the food, drinks, music, venue…everything! Zara

Wow – what a night! The authenticity of the party has been first class – Just how I remember it! Iris Worldwide

Thank you so much, everyone had lots of fun and there are lots of sore heads today in the office. Everyone loved the detail that was applied to the event Grey London

WOW!! Thanks for making Good Times at Carnival the best events over the last 30 years, I can’t thank you enough, Dynamite have been amazing to work with Norman Jay M.B.E

Wanted to thank you again for everything!!! Your support, your patience and well.. just everything!!! It was a great day! High Street Fashion Brand

Thanks Dynamite, lovely working with you on this project, everyone said how much they enjoyed the day, it all went as planned H&M

Thanks for making my big 40 amazing, everyone loved the party and can’t stop talking about how great it was, look forward to arranging my 45th with you! Private client

I’ve just been reminiscing with my dad and realised I hadn’t thanked you both!! Time has flown by so sorry for the delay! Anyway, a huge thanks for making my dads dream a reality! Everyone had an amazing time! Private client

Oh my god, what a night!! Blimey, I couldn’t have dreamt for it to go any better. The venue looked fantastic; your staff were so lovely and did anything for me and my guests. The photo booth took at least 10 years off everyone; the Cuban Brothers did everything above and beyond what we’d hoped for. Thank you so much, the party was amazing! Private client – Private party

Everyone loved the night. A massive thank you to you and all your staff for doing an unbelievable job. Thanks for making it a crackin’ party! You lot absolutely rock! Smashed it! OMD

Best summer party we have ever had without a doubt – please can we do it every year! Saatchi & Saatchi

Thanks again for everything, it was a great event and everyone had a wonderful time! Pernod Ricard

Thank you for organizing a fantastic day.. it was so much fun, I know everyone had a great time and hope to do it again next year High Street Fashion store

Thank you so much, it was the perfect team building event, exactly what we asked for – what will we do next!? High Street Fashion Brand

What an amazing day – we have never seen numbers up at the board park like that before, the party was going off! Snowbombing

What an amazing party, I’ve just had so many emails saying how wonderful it was. All 4 of us birthday day boys totally loved it! Private Client

Thanks for everything on Saturday night, it was great and everyone loved it. Foxtons

Thank-you for another fantastic party, all staff feedback has been incredible Pokerstars

Thank you so much for organising such a brilliant party – everyone had a fantastic time and the feedback has been amazing. The acts were first class and the food went down a storm! It’s been a pleasure working with you guys and hope we can do so again soon Saatchi & Saatchi

Just wanted to say a huge thank you to you and everyone involved for a truly amazing party last week, absolutely everyone said how fantastic it was Oasis & Warehouse

Thank you. I don’t know what else to say. I can’t believe how amazing everything was. Just thank you! Saatchi & Saatchi

Yet another fantastic event, thank you to your incredible the team, everything was on point and feedback has been amazing, everyone loved it Foxtons